I was supposed to be celebrating a monumental triumph today. The official email announcements, the daylong FB partay, a drawing for a free registration into this thing I've been working on for a year-and-a-half: my first online course--tah-daaaaah!

Okay, I've technically been working on this project for over fifteen years, and in the larger scheme--all my life. This new drill I've created was to be the first taste-treat in my master-work, grandlicious poobah!

(Seen here: the elusive Hartebeast in her natural habitat during last summer's photo shoot with The Mom. Lo, we see the lower deck with its coat of primer--the second-to-last step in an unexpected major home repair.

And there is the Fallen Peach.

Far and away on my upper deck with its brandy-new paint job, we had posed a sweet little still-life of abundance. Ahhhh, so lovely, so luscious! Until the peach did what peaches do when inspired by gravity.

Pretty much how I feel right now.)

Do I even have words to describe how I feel about this latest failure to launch my damn drill videos? NO. And that's saying something. I created the first three in 2002 as part of my own physical therapy. I started sharing them with my students around 2003. Several years later, we were struck by this glorious notion that I should put them on video to share with dancers far and wide. Friends composed music for the things alongside me. A CD was born. We started filming. Stuff happened. We stopped filming. Throughout the years, various other people have gotten it into their heads that this sounds like a glorious project. We discuss filming. Stuff happens.

The videos never flippin' do.

On the Spring Equinox this past Wednesday, I woke up deeply depressed. For this auspicious occasion--not merely Equinox hailing my beloved Persephone's return from the Underworld, but a Super Full Moon of wooga-worthy proportion--I had planned to make my own return from this most recent drop-kick into the Great Below.

Wednesday had been slated for the beta-testing of my registration page, with Friday morning marking the official launch. One of my CO besties was standing by, ready to assist me via video chat with her Dungeon Mistress' gazillion-sided dice. I thought that would be a fun way to choose the winner of the complimentary registration into my brand new course, a drill never seen by anybody but my mirror.

There are five drills now, instead of the original trio, all choreographed to music from the Suite! CD. Why five?

This first drill is a compilation of my favorite exercises and techniques designed to build stability, mobility and alignment from the feet to the hips. You know, the foundation of...everything?! It's the Earth Element in my BellaDancer's Basics quintet. The entire buildup and advertising spiel and photos--it was all built around the bloody Equinox!

I missed my launch window.

So I spent Wednesday being a mopey, whiney, despair-ridden turd. I couldn't stop crying. All. Day. Thankfully, I taught class that night. It was one of those really special classes that produces magic. My die-hard gals are magic. I need that single hour every week as badly as they tell me they do.

Well, the magic ran so late that I didn't make it to the Equinox/Full Moon celebration I had just been invited to. I drove out. I went to the wrong house. Some really hot guy came bristling out into the dark with his shoulders and chest puffed and his head down to demand if he could help me. There was no helping this clusterfuck of a day. He shooed me farther down the dirt road where my friend who had invited me had already left. She did come back, we hung out with the few stragglers who remained, and I wrote my list for the fire.

The intention was to write down all the things you wanted to release for the coming year and Let It Burrrrrn. Un-herdable Sagittarian poop that I am, augmented by my craptastic mood, I rebelled. (I know. Shocker.) Instead, I scrawled in obnoxious pink marker, "I release all that is standing in my way of..."

And then I went on to list all the things I want to bring into my life instead.

It was grand. It was great. I needed a good fire and that moon, viewed through the skeletal silhouettes of the barely budding trees, was glorious. BLAHHHH. I drove home with fuzzy contacts and burning eyes and went the fuck to bed.

As I demolished the shit out of fruits and vegetables with My Precious (the new Ninja blender/food processor that's transformed me back into a kitchen-bitch overnight), I found myself quite thrilled to be raging. This is always a good sign. It means I'm ready to do something about something. It means that I'd pushed Ramming Speed on this round of cycling through my 5 Stages of Grief.

It had actually begun less than five weeks ago. Like a good little launcher, I had crafted my editorial calendar, complete with all the proper performing monkey shenanigans designed to Boost Awareness and Warm the Audience and eventually lure my species of weirdo to my tawdry wares. I was actually excited about that, because I had all sorts of dorky, informative and fun things planned.

Then I looked at the literal calendar.

To follow the plan my biz mentors and I had concocted, I would have had to start that pre-launch sequence in three days. Yup. THREEEEEE. DAAAAAYS.

I still wasn't recovered from Memphis. My filming schedule would have been tight as it was, but that actually had been good for me. I like to sweat. I like to work hard. I like to dig in and get my hands dirty.

But then a delightful monkey wrench landed on my plate. I had been waiting since August for Vocational Rehabilitation to assign me to my new gal. I was the last client my original one had intaken, and upon realizing that my case was in Small Business, not a standard retraining for employment, she told me we couldn't get squat done in the two months she had left working there. That was okay. I had plenty of projects to keep me busy.

So, no-shit-there-I-was, trashed from a triumphant event in Memphis, and gearing up to begin filming my first drill when I got the awesome news: I had been reassigned and needed to come in for an overdue assessment ASAP. I did. It was great. I even was gifted a one-on-one mentor with the U of Arkansas who is now helping me create my business plan so I can finally apply for a grant.

And that one significant straw started the whole pile slipping.

My difficulties obtaining the correct audio equipment had already put me over a week behind. Even the people at Musician's Friend were baffled at how little information is out there about how to set up a home online dance studio, but we got it figured out. My equipment came. I rejoiced. I set it up. I set out my outfits in the chosen order of shooting.

And my earbuds died. I had only used them twice. This was the only way we could figure out how to keep my body moving at the correct musical tempo without also recording crappy ambient music along with my vocal instruction, but that's okay. I kept pushing on. There were all sorts of other things I could film that didn't need music yet--

A glaring cold sore at last squished the notion once and for all. The Universe had spoken. I was NOT supposed to be filming yet. So I didn't. Instead, I did my third scaling down of this launch. I came up with other ideas I could put out there on Equinox instead. Less ambitious ideas. Fun ideas.

I ran into a snag on every one of them.

At last the fateful day arrived. No beta registration. No quick-list mini-course. No dorky teaser video. Only massive depression.

As I honed my impression of the Infernal Lord of the Underworld hacking and pulverizing helpless produce into medicine, it occurred to me that for the past month, I had been up to my earlobes in Denial and Bargaining. "No, no, but if I could only manage this little...No, seriously, I could just put out this teensy thing here and--no, really! If I could just--"

BZZZZT. Thank you for playing.

Thursday was Anger and a better form of Acceptance.

Friday I decided to mourn the death of my Equinox Launch by doing this: 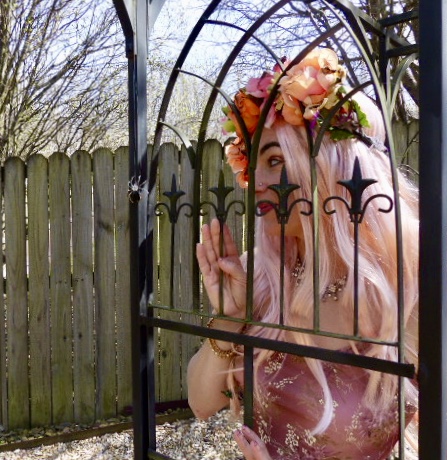 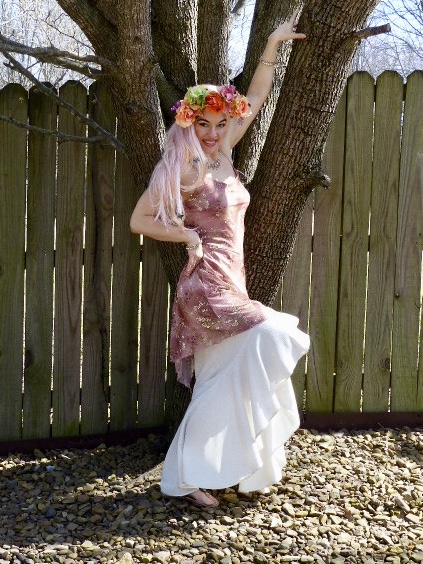 The Vernal Equinox, after all, is not the celebration of succulent fruits and gardens a-burst. Nope, it's the day Persephone arises through the gloomy gates, still quite pale, a little incorporeal, and more than a little fanged from Her winter loving on the Lord of the Dead. Mommy Demeter, too, is looking a little ragged and skeletal after six months of being hacked off at the raw deal compromise everybody gets to live with.

The first day of spring celebrates the day when the seeds, still buried underground, crack open. Soon, they will sprout their tender heads above the earth. The buds, which are now just beginning to pop out on the trees in my ravine, join them in celebration.

And so will I.

For today, I culled the herd of the photos and made a little video. Hey, if I can't give y'all dance, I will at least give you Ooooh-Shiny and some of my family's dorklicious humor. You can also view the video on this blog post about the day Hades decided He's a really Fungi as I was putting together the costuming ode to His wife.

CHOOSE YOUR OWN ADVENTURE:

--UP NEXT: THE ARENA- A Constant Theme

--THE NAVIGATION TABLE OF CONTENTS

I GO TO A FUNERAL - And Come Home With a Date

Navigation: Table of Contents by Category